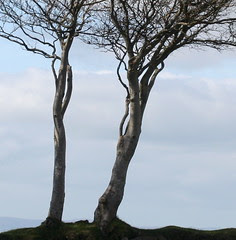 Thank you for your patience during this break in transmission.

Normal service will resume as soon as possible...

In fact I hope that now I really am back.

Today we returned from a week away so there will be a few photos to see before I get back into posting any art. We spent the week in a holiday cottage in Cornwall. The whole estate is currently for sale if anyone has £1.8 million to spare! If it were mine I'd turn the cottage we were staying in into a studio...

So what you wonder have I been doing to keep me from blogging for several months?

In June, for the last two weeks I was on retreat. In July, August, September I've been working on myself to improve my health - I was using energy medicine which always sounds far too weird when explained so I won't try - but a consequence of it was that I was using all my creativity in working out what to do with nothing to spare for any art or blogging. Several interesting things did happen and I will blog about them later. For now I'll just relate one synchronicity that occurred.

A couple of weeks ago the work that I was doing on myself came up with the phrase:

H.K. is Health Kinesiology and is something I first experienced on my birthday in 1997. It was so transformative that I trained in it, although until then I'd not trained in any alternative therapy of any sort. I practised on anyone who would let me for a couple of years after I'd trained but then I stopped being able to get "energy permission" to work. So that was the end of my potential new career... One of the people I'd swapped with during that time was the woman who'd first done H.K. on me. I hadn't seen her since I'd stopped doing H.K. on others, sometime in 2000.

Having done this work on transcending H.K. I went down to my local Amnesty bookshop which is one of my regular haunts. I'd found a couple of interesting looking books but I felt that there was something else. I lurked for a while. In fact I think the chap behind the desk, who was new and didn't know me, began to give me odd looks. Then I heard someone bring in a bag of books and say a couple of words - I recognised the rich South African tones of the woman who'd first done H.K. on me. I dropped the books I'd been considering and rushed out of the shop to catch her.

She had stopped H.K. sometime ago too - because she didn't like the advanced courses. So there we were closing the circle.

And its relevant to this posting as I've been waiting to begin blogging again, not sure what I was waiting for, knowing that I would start again... but now I've suddenly found myself wanting to take photos and thinking about art... its time and here I am...

Yay, I was first to comment on your return - welcome back!! xx

Thanks Mr Nomad - its good to be back!

I LOVE synchronicity! This week, I was wondering where you were! Welcome back. Good health! And a lot of creative ideas! :)))

I've no idea where I'll be going creatively but I'm ready to find out.

I enjoyed your brief synopsis and drooled at the cottages (which one did you stay in?) and am anticipating photos and art.

Godd to hear that you are feeling well again. I will look forward to your posts and what you have in store for us. Is that the Fowey estuary?

Thanks Androne. We stayed in the coach house which was the one I attempted to link to...

Hi Davem - well spotted it was indeed at Fowey! And I wasn't feeling ill - I just wanted to feel better - as a long-term sufferer of M.E. I'd got used to the level of wellness I had but I wanted, and I hope I've now got, more.

Hi. Glad to hear you are well. I was just thinking about you the other night. I am reading a book called True Balance by Sonia Choquette with some other bloggers. It is about balancing your chakras. I use to focus my energy more before I had children. Now I often forget that I have that power (as we all have)
The other day though I started focusing more and could feel my energy recharging. and then a few days ago I had an experience where I was filled with light from hearing a song on a CD someone had made for me. That night I thought about you and how you would write on your blog topics I am so interested in. It was like I knew I would be in contact with you soon.
Nice to see you posting today!

Carline!! You're back! I can't tell you how happy it made me to see your cheery comment on my blog.

Hurray for synchronicities. I'm wondering what Health Kinesiology translates to in America...I know there's something called applied kinesiology, where (I know I'm oversimplifying this concept, but I'm tired!) you ask your body questions and depending on the resistance of the movement, you get your answer (I'm probably not making much sense, because I've not gotten enough sleep!) but is it something along those lines? Or is it closer to Reiki?

Can't wait to hear more from you.

Oh, good grief, I see I've gone and misspelled your name in the comment above - I'd like to buy a vowel please and solve the puzzle: Caroline!

I'm glad that I found this blog right when you came back. The pictures are lovely! I wish I could buy the estate!

Anonymous - you aren't back yet? What's taking you so long (she says with a smug grin...)

Melba - I've read some Sonia Choquette but not True Balance. I've used my chakras to balance myself for the last few years - its one of the ways that I'd transcended HK some time ago as HK balance is based on meridians. The key is having a way to check that one is in balance... and the method I use is only usable by people who can self-test using their own muscles plus a magnet... that's something that I got from HK and still use. I use my hands and my attention to focus on my chakras to check them and is something I've developed for myself.

Your experience sounds wonderful. I hope you are able to ground the light into yourself regularly!

Tinker - I thought Carline was another pet name since Andrea put Carlone... Health Kinesiology doesn't need translating it was developed by a Californian who now lives in Canada. His web site is at: http://www.subtlenergy.com/
HK uses muscle testing to ask verbal questions, most applied kinesiologists think that verbal questioning doesn't work... and it only does work if the bodies are both meridian balanced first... as a health kinesiologist one gets the message (usually quite quickly) that balance has been lost and that it needs to be regained before further questions are asked.

I've also done Reiki and my own work is now nothing much like either HK or Reiki... but I do rely on being able to be in balance and to do self-test muscle-testing to check what to do. The actual energies I use are rather different and not easy to explain as I suspect they are rather idiosyncratic...

Arthog - thanks for dropping by! I wish I had the ability to buy it too... though if I had the money I'd probably buy something elsewhere...

good to see you getting back, caroline.

super composition in the top photo! my favourite type of image. i like the panorama too.

Hi Ian - thanks - I took lots of photos of these trees and others like them - I thought them extremely photogenic subjects.

I'm so glad you're back!
A few days ago you popped up in my mind... I wondered how you were doing and when you'd be back. I thought about sending you a comment...
"Caro, Caro, Come out and Play!"
Did you hear me? :)

Hi there Mr Norms - you may regret that wish as I took so many photos! But I need to limit how many I post otherwise I'll never start doodling again.

Joy Eliz - I can't say I did hear you but I was feeling the pull to come back.

Won't regret! You've a good eye and I love Cornwall. And I'm a photoholic.

Welcome back, and yes catch more like these! Great photo energy. Glad to see you back active.