IF - Wind & more on Zero Balancing 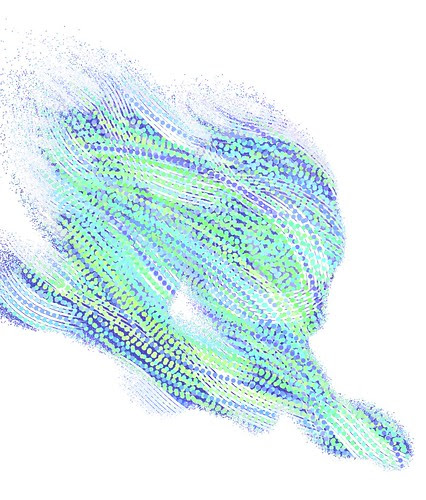 Yesterday's topic of Wind inspired a dream last night with two people turning blue in a cold blast of air. That dream inspired this abstract.

On the first morning of my zero balance course I arrived last, not late, but last. There were only two others, both women, on the course; one who had come from Spain but who had lived in Hebden Bridge. The other who was currently living in, guess where?, yes Hebden Bridge... they hadn't known each other before hand so this was fortuitous. And of course by the time I'd got there they had already bonded. They were like long lost twins. Oh and both were Gemini... (and considered signs important... that's one of the hazards of going on alternative courses ;-) Of course as Jim is Gemini I ought to consider myself experienced in getting along with Geminis... ;-) Both were staying in B&Bs so they also went out together in the evenings and drank Guinness. I felt left out! But not so left out that I wanted to join in... And they did try to include me - they were lovely people (which is one of the reasons for going on alternative courses; the people on them often are lovely) - but they were lovely people who'd struck gold meeting each other!

The teacher had also invited a Zero Balancer along to each day to even up numbers, on the first day it was someone I'd met on my previous course - she'd been going to practice days whereas I hadn't, and for the rest of the days someone who'd qualified as a certified Zero Balancer, which amongst other things means he'd done at least one advanced course with the guy who invented Zero Balancing, Dr. Fritz Smith, and had written two essays and written up at least 50 case studies. As the two Hebden Bridgers showed a definite inclination to work together as much as possible I was lucky as it meant I got to work a little more than my fair share with much more experienced ZBers - which was the silver lining for me!

When receiving a Zero Balancing you are told that it should either feel-good or hurt-good (and yes I know I ought to have written this up at the beginning of the week when Sunday Scribblings' prompt was "Good"). So when giving one you have to be aware of the effect you are having on the other person. Very aware. You also need to be strongly within your own body. This is the biggest challenge for me. I remember being a much more sensuously aware person than I currently am; M.E. was a painful experience, especially as I became allergic to aspirin and paracetamol etc. so I'm having to relearn being in my body. One of the reasons I like receiving a ZB is that it makes me more aware of my body in a good way.


On Monday, in the Amnesty bookshop, I found a book called Focussing by Eugene T. Gendlin. It gives instructions on how to really listen to your body - just what I needed! And after reading it I realised that this was something I'd done before in a different context as one of my favourite books for dream interpretation is Let Your Body Interpret Your Dreams by Eugene T. Gendlin! I've never found that dream dictionaries rang true for me but that sense of "ringing true" is what you use if you work with his method.

Something else I liked about Focussing was that the whole technique had come out of research into why some people responded to psychotherapy and others didn't. As a practising psychotherapist Gendlin found the results of his research counter-intuitive but acted on it anyway. The research had shown that it was possible to tell who would improve using psychotherapy within the first two sessions. And this was down to a skill the patient had, not the therapist. Over time he and others developed Focussing as a way to enable the patient to be more in touch with their own body's responses. And being a body those responses can be irrational, contradictory and generally not accessed intellectually, but they can be felt. What's more this is a useful technique without being in therapy - it enables one to relieve all sorts of stresses from the body. Simply listening to the body releases tension, things SHIFT.

Which brings me back to Zero Balancing. One of the things that happens in a session is that things SHIFT. The receiver goes into places that are not normally accessed consciously. The givers job is to ensure that this is a beneficial shift and not one that depletes the person. We were taught all sorts of signs to watch out for and what to do if we thought someone was getting depleted. The whole task is an interesting juggling act of increasing bodily awareness whilst also facilitating the exploration of altered states of consciousness and keeping the person safe. And all in 20 minutes or so - that's how long a ZB often takes.

Last night's dream produced a SHIFT for me. I realised that the cold wind was being blown at me was other people's disapproval - and I saw that I tend to react to it by playing up on the outside (thus eliciting even more disapproval) and making me feel hurt on the inside. And from there I realised how useless it is to show disapproval too as it tends to cause more mischief and hurt... well at least that's the stage I'm at right now... as these things aren't logical or consistent I may end up anywhere next!

I really love the movement and colors!

This reminds me of a really light frost: fragile, cold, organic. Must read more of what you've written about zero balancing (looks fascinating), but I've been dashing through blogs lately. Back soon...

Thanks for posting more about ZB, Caroline.

Every workshop seems to have its upside and downside, doesn't it?

Andrea - a frost? Yes that's definitely an aspect of a really cold wind. And I've been cutting down on my blogs considerably - different strategies with similar effects.

Tinker - glad to - yes all workshops do have their ups and downs - and at least I got silver! Thanks I enjoyed making this piece - the dream needed some sort of physical manifestation to get it out of my head - it was one of those haunting ones.

Cool pic! As far as zero balancing goes, just use a quadratic equation! :)

This is absolutely gorgeous!! Niiiice.