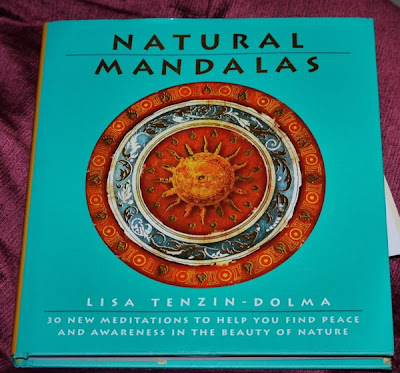 This book arrived today. I was prompted to buy it by Kathryn the Collage Diva who is giving a copy away on her blog... I felt so drawn to it that I ordered it. Here is a sample page: 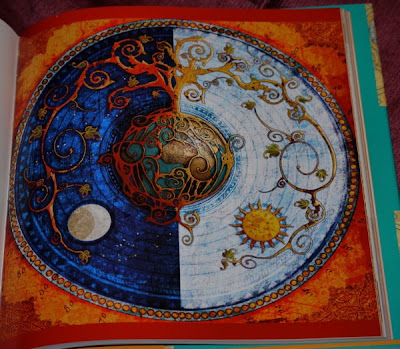 Its a while since I showed any of the computer generated kaleidoscopic mandalas that I'm so fond of... so here are six, derived from a crocus photo I took a couple of weeks ago: 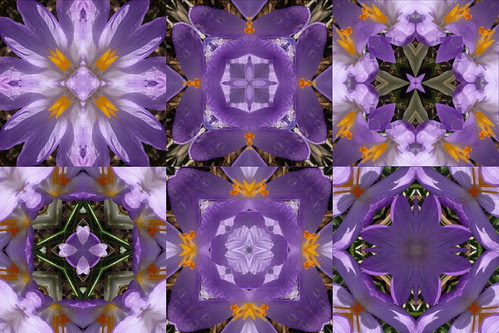 Having made those I printed out a bunch and used them in what's called tea-bag folding... only I can't show you that as the dog ate my homework... I mean Teasel ate what I made before I'd photographed it...

Here are two more mandalas I made, digitally, though somewhat differently: 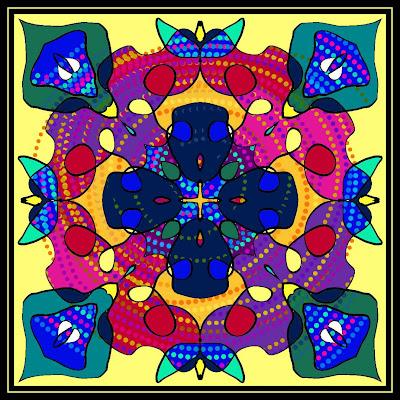 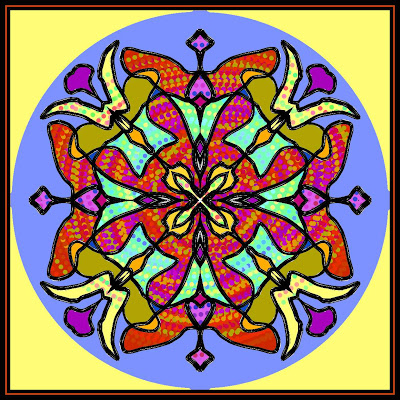 I also realised that something I'd been working on a week or so ago might well be in rather mandala-like: 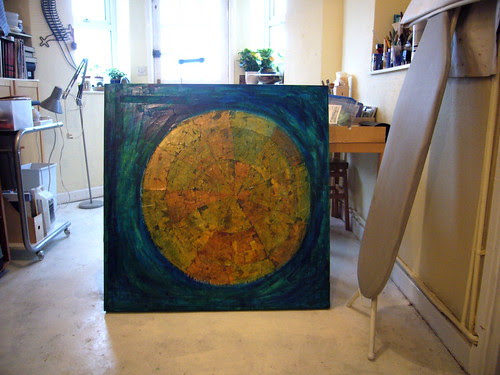 Its made from torn up atlas pages in the middle and surrounded by torn up AS Maths papers around it. Both then painted. I'm not yet sure about the colours... Its on a 1m square canvas and is the 4th in a sequence of circles in squares that I've been working on since sometime last year... none of them entirely finished...

Another project on the go is an altered book for a class that's being offered on line which started on Sunday. This is the book I started with: 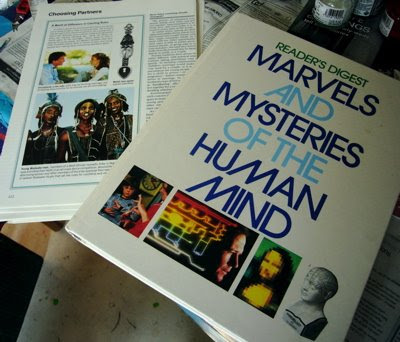 And just to finish up this is rather like a natural mandala too: 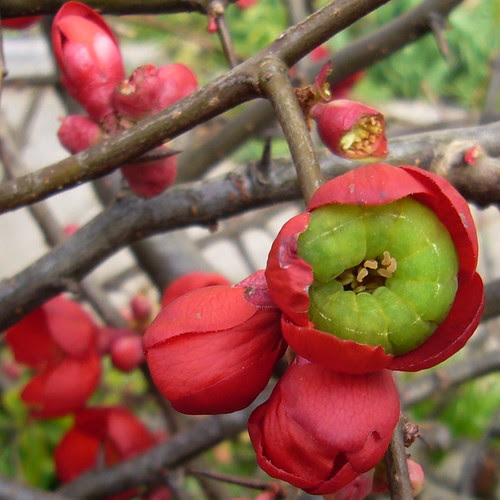 Have I told you lately how much I am in awe of your fertile mind? Heaven help us -- spring must be here!

Oh every mandala was just sooooo beautiful. You are such a magnificent artist! I was talking to my daughter tonight about Kathryn's project. We are going to create mandalas together. Evidently she is an expert. She is also 12.(lol) We shall see if she can help her tired old ma:)

I love your painting thus far! What an interesting concept. :)I find the colors and textures fascinating! :)

Marvelous mandalas! Your painting is beautiful - I love the colors you've used thus far.
The fruiting blossom is rather mandala-like. Is that a quince?
Looking forward to seeing more of your altered book.
Happy Spring!

Exactly what Andrea said. About your fertile mind.

Now you've given me an idea. I'm going to start looking for mandalas everywhere I go...it sure is an interesting way of looking at the world.

Isn't the book just gorgeous! I'm so happy to see that you picked it up. It is sure to bring you lots of inspiration.

How lovely all your photos are. I love those crocus mandalas. Would another term be fractal art? - one section can be representative of the whole. Nature has such a rythmic balance, there something so soothing in that.

OO, i love the look of your large canvas piece. The colors are fantastic!

love all the mandalas...can't wait to get the book myself. What do you use to do your mandalas on the computer?

Caroline, love the crocus photo kaliedoscopes, I have a cat who likes to sit on everything I make, the worst she has done is knock over my painting water on my project...can't wait to see how your altered book class goes. I am enjoying the soul journal class, the photos were altered by soaking in water and then sanding, no bleach...they have to be old style 35mm photos though... Janet

Love this post. I want to get that book, too! I love the digital mandalas. I can't make one to save my life. lol I've tried.

Gosh - sorry to have left all these comments unanswered - I've been neglecting my blog!

Andrea - fertile mind? Now there's a thought... could journal about that one - thank yoU!

Lissa - I hope you and your expert have had a great time making mandalas ;-)

Genie Sea - thank you - I've not added to it yet - I love both colours but not together... one will have to be changed...

Tinker - Yes it is a quince plant - its one that grows in someone else's front garden - I had one but it died ;-(

GG - wheels within wheels and cogs that turn other cogs...

Kathryn - thanks for recommending the book it is lovely.

Ellen - They are quite fractal like though maybe in this case its more faceted...

Leah - thank you - the photo improves on the colour balance of the real thing... maybe I can get a clue from that!

Judy - thank you - I use Corel Painter which has a special thing for making kaleidoscopes... its wonderful you move it around over your image and see all the different possibilities.

loriidae - knocking the painting water over a painting once won me a competition as s child! Thanks for the info - I'll have to sacrifice some old photos to experiment on my own.

Lisa - funny what comes easily to some and not to others... but I am using Corel Painter and it makes making the digital ones extremely easy! (See my comment above to Judy)

those crocus mandalas are unbelievably gorgeous!!!!!
thanks for sharing them with us.

I'm so glad you stopped by my blog and signed up for the giveaway, I may have missed your great post otherwise!! I've been thinking that I'd like to learn more about mandalas, so this was great (and it looks like there's allot to learn from the link you provided too, so thank you;)
I haven't drawn a name yet, but I will later this evening-I look forward to browsing through the rest of your blog tonight-
take care
Trish
oh and your project with the circle looks so cool, I'd love to see the finished project!

Love your circle painting! What a brilliant idea with the atlas pages and the maths pages!!! Looking forward to seeing more of this in the future!!!

Arty Em - thank you - I love making that sort of Mandala.

Trish - glad to point you on towards Kathryn's HUGE post on mandalas!

Mixed Media Martyr - Thank you - I got tremendous joy from making it as far as its gone. One of those getting up early and just making and seeing what happens times...