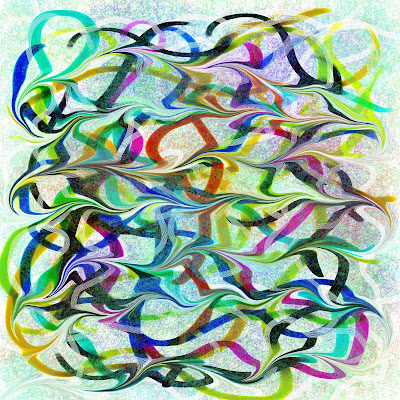 "Routine and the Habitweb" by Caroline using Corel Painter
Illustration Friday's theme this week is Routine - how useful with respect to the No Diet Diet. The book is clearly expecting most people to be stuck inside a routine as well as lots of habits. For instance always getting up at the same time, working the same hours, lunching at the same time, going to bed at the same time, etc. I have no such time-based routine. As I'm not working I don't have anyone else setting my hours for me so my habits are mostly regardless of time and more to do with context.

Today is day 12 of the No Diet Diet for me and it is about being, either more spontaneous or more systematic, whichever one is less comfortable with. There is no doubt about which way I verge - I find being systematic extremely difficult; hence the lack of routine. Not that I haven't attempted to get more organized, I have, but my default behaviour... um... habit... is that of being spontaneous. So that's spontaneous but habit-ridden! A bit of a puzzle but it seems to be true.

I attempted to show the drag of the web of my habits in the picture I did. I'm not sure how well it works as an illustration but it was fun to do.

A couple of years ago I gave myself a day like my school days used to be with everything planned for each hour. I set a timer and did it. That day I felt exhilarated by it but the next day I felt the most extreme refusal to ever do it again - body and soul! Or maybe it was less body and soul but more my habits reasserting themselves... so hard to tell the difference... whichever it was I haven't done it again and decided today to be a little easier on myself in my pick of new systematic behaviours to try. Instead I've planned a few things to do today and over the next few days.

Yesterday I fell into a habit I didn't know I had. I failed to break it at the time, I was sort of aware that I was in it but found it particularly hard to break out of despite several times almost managing to. And this was a habit to do with food.

I'd bought pizzas from one of our local delis; smaller and more expensive than the usual supermarket pizzas and I hoped both more wholesome and more delicious. When I started mine I immediately didn't like it, and yet I carried on eating it. The bread-base was far too thick and the cheese tasted stale and nasty. And the result was it sat very heavily in me and I felt very much less happy than I had that morning (which had been lots of fun; we'd shopped in a new place and bought Japanese ingredients so that I could finally make Jim the sushi I've been promising him for the last 13 years - I wish I'd made the sushi instead of having the pizza!).

In the past, I've had quite a few discussions (arguments?) with my mother-in-law about leaving food. She is very anti-leaving food and considers it a crime to waste it. This is despite the fact that she would also like to be a few pounds lighter than she is. I say that simply eating food because its on your plate won't feed people in other countries or poorer people here and it is using oneself as a waste bin.

I don't set out to waste food but I do know that simply eating something because it is there, rather than because I want it, is more likely to harm me than help anyone else. Unfortunately my rational argument seems to have been forgotten by my body and somehow I've picked up her habit of eating something because it is there even when it is horrible!

Something else that seemed to be going on also seems key. This was the first thing I'd eaten, whilst on the No Diet Diet, that hadn't been satisfying. I noticed that part of the urge to continue to eat was the need to feel satisfied. However it didn't satisfy me at all and I just ended up feeling stuffed! Yuck!

All useful lessons for me and I hope I'm more able to break this habit when it creeps up on me again!

Today, in the interests of being more consciously systematic I finally got around to checking out the website for the No Diet Diet and was most disappointed. They want a subscription of £22.95 per month, or £275.40 a year! Something that's available to the non-payer are the previous monthly newsletters which, frankly, are not very inspiring, nothing like as good as the book. And yes I read (quickly) all 20 of them - this is my day for being systematic.

I got my copy of the book from my local charity bookshop but even full price its only £10. Clearly even more of a bargain than I'd previously realised.

And talking of bargains - remember September 4th is my 3rd blogiversary and I'll be featuring a giveaway then!

Update: I've just scared myself silly looking at some of my books on how to be more organised... I think I'm going to have to consider this an area that really does need some serious changing of habits.

Organizing for the Creative Person may be the best bet out of the organising books but it feels too dense for me today.

The Ultimate Book of Organising Hints and Tips is at least brightly illustrated and can obviously be dipped into - maybe I'll pick one thing from here to actually do today.

Getting Things Done - I know I've thought this potentially useful in the past but today it too feels too dense.

Looks like the message is that I'm feeling dense - still feeling the after-effects of that pizza from yesterday I think!
Posted by Caroline at 8/24/2008 10:01:00 am

Hello! I've been following your "No diet diet" with great interest! Being trying to break the routine myself. Not easy... One little step at the time! :) Should I say that NOT PROCRASTINATING is the most difficult thing for moi...hhehhe..

MP - yes one little step at a time is the way to go - and simply doing SOMETHING different - even if not the suggested something from the book definitely helps.

Thought I'd just pop in and say hi, I'm back, but you've been so busy over here that it looks like I'll have to come back again!

i loved this post, it just 'spoke' to me. after years and years of being anorexic and bulimic (originating from my mother NOT letting us leave anything on our plates!), now recovered, i know how hard it is to form an eating regime/routine etc...what works for me is not mixing foods that fight!whatever works for you, the main thing is not to have regrets after you've eaten the 'wrong' thing...and man is that hard!

have just read some of your last posts, really enjoyed them. i am in london, so hi and 'where's the summer?'

Soulbrush - I'll be over to visit your blog in a mo. And yes the regrets and, in the case of Saturday's pizza, the stomach ache... are the what's hardest to cope with!

okay girl you visited, now i am going to add you to my list of favourites to visit you often....you asked for it!

The brain gets a kick out of routines. It keeps it feeling nice and safe. What's the fun of life without bad habits? If our superego knows so much, how come he's not running everything instead of just nagging about it?

SB - (is that an okay abbreviation?) thanks and I've added you too.

Tony - I suspect the kind of "kick" that the brain gets out of routines is the same it gets from lots of drugs... it stops it having to bother to think and kids it that it knows what its doing. I don't use the term superego - it strikes me that my ego could very well over identify with it...

I think many of us were brought up with that habit of 'cleaning our plates' - and even though I always wanted to say, 'then send it to them!' when reminded about the starving children in other countries (never did say it aloud, of course :) - anyway, I still can find myself trying to finish my plate, anyway. One thing that has helped - at least a little - with that, is our compost heap. Now I don't feel quite so wasteful (though I don't think I would throw anything with cheese in it - but possibly that crust, if it weren't oily).
Hmm - "Organizing for the Creative Person" - thanks for mentioning that one - I think I might need that!