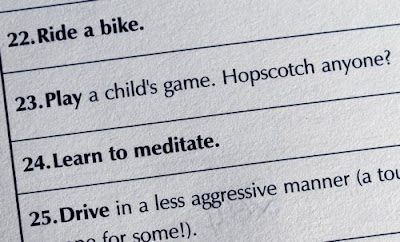 Part of the "Do Something Different" regime is to do just that, some different things. You might think that there is rather a lot of difference between 23 and 24 from the list above. But when I looked up in one of my books on hints on how to improve meditation it said, on breath counting, that one should approach it like hopscotch... if you step on a line you simply go back to 1. 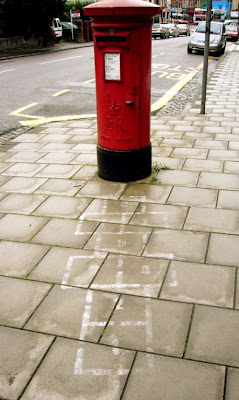 Yesterday I started the "Do Something Different" regime and did not watch telly, nor did I listen to the radio, read or switch on the computer. It was amazing. I did know that I tended to switch the radio on and off a lot but I had no idea how strong the compulsion to switch it on was, despite my tendency to turn it off again quite soon afterwards.... I resisted but I kept on noticing the urge!

And this increase in self-awareness has already had a knock-on effect to awareness of other habits, including some to do with food. I'm amazed that even the first day should have such an effect.

Today the task is to write for 15 minutes in a way one wouldn't normally write (and despite the fact I've not blogged much recently I didn't think this would count!). So I did it earlier and in fact ended up writing for more like 45 minutes... I started it as a writing meditation, writing what I heard and sensed in other ways. It was a bit like hopscotch too... every time I drifted from the now and noticed my drift I started off again with what I heard.
Posted by Caroline at 8/14/2008 09:59:00 am

Nice hopscotch photo!
I like the idea of a writing meditation...
and hopscotch meditation too :-)

Tinker - thank you! This is a piece of local graffiti that someone painted over the paving.

This do something different regime looks like fun but in a moment of madness I have signed up for a marathan in December, I have been getting up early to run and I have managed to lose 3lbs too!

Jo - that sounds like you have a big doing something different going on already! Are you going to do some smaller ones too?