Celebrating a December Wedding in June! 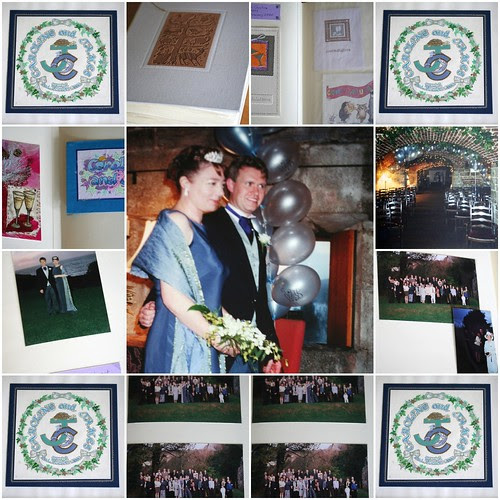 Tinker has invited everyone to celebrate the June Honeymoon with her on Saturday June 14th. After attending a lovely wedding at the end of May she has been carried away for the last two weeks on a tide of romance and thoughts of June weddings despite her own having been some other time...

Mine too. Jim and I were married in December 2000. And I never have got around to putting up photos of our own wedding, despite the fact that for a wedding the May before, where Jim was best man, we'd put up a whole load as part of their wedding present - here. So now I'm taking this opportunity to show a little of ours. 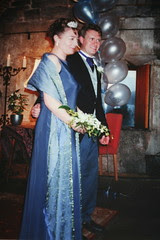 On Leap Day 2000 we were celebrating having been together for 5 years, then I proposed to Jim... and luckily he agreed ;-)

This was my second wedding so rather than white (or the nearest shade that suits me) I choose to be married in blue. I did go and try on lots of traditional dresses, I also contemplated making my own... but I ended up buying a simple long dress and was more than happy with it. I made the shawl to go with it... also a lacy cape, though I've not found any photos of that yet...

My real treat was the tiara - I'd always longed for one. It may only be a fake but what a wonderfully sparkly thing it is; I felt like a princess. 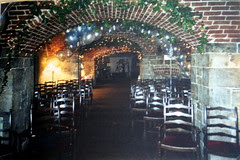 We were married in Cornwall because we both would like to live there one day; though so far that's not been possible. The actual venue was an old fort - Polhawn Fort - on Rame Head - its a bit like a big self-catering holiday cottage set-up for weddings... We hired the fort for a weekend. Various friends came with us on the Friday and we had a fun time decorating it and making it all ready for the next day. The fort sleeps over 20 so quite a few people were able to stay there, others choose to stay in nearby B&Bs. It was a long way from everyone's homes so we were very lucky that so many people choose to come! 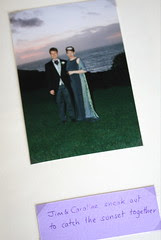 The wedding service was conducted by the local marriage registrar... we hadn't met her before the day but we couldn't have chosen anyone more suitable... and I was in tears during the wedding itself... I was quite taken aback by the emotion of the whole occasion.

Once the wedding itself had happened Jim and I snuck out to take our own photo of ourselves on the cliff edge, using a remote control on my SLR.

We had specifically decided against hiring an official photographer and simply took our own cameras and handed out lots of disposable ones to our guests. This was wonderful. It meant there was no-one bossing us around or organising us. No-one intrusively taking photos - just everyone who would have been snapping away, snapping away anyway.

When I looked up from taking this shot of us I found that despite the lack of a professional photographer to organise them all the guests had got themselves together for a group shot:

We then joined them and had fun attempting to take group shots of all of us, using a camera placed a little too far away in failing light... 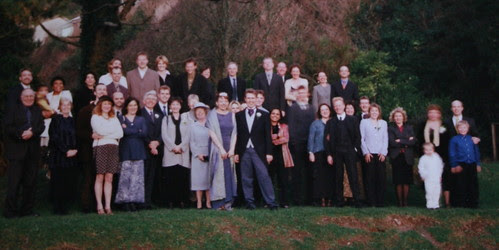 And the light really was fading. The wedding itself had been at 4 pm and as this was the beginning of December the sun had already officially set... (15:54). I can see the appeal of long June days now... :-)

The weather was however amazingly warm. We were incredibly lucky. And although it then proceeded to rain buckets over the next week whilst we honeymooned in Cornwall at least on the day it had been dry.

One of the advantages of handing out cameras to all the guests was the variety of choice of subjects - my favourite are these self-portraits taken by one of my sister's boys: 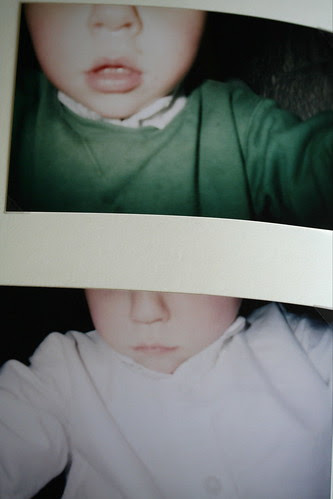 It was a wonderful day. I've enjoyed recalling it to share it here now. Thank you Tinker for thinking of this!

And as a final image - Jim's mother, Mary, made us this lovely memento: 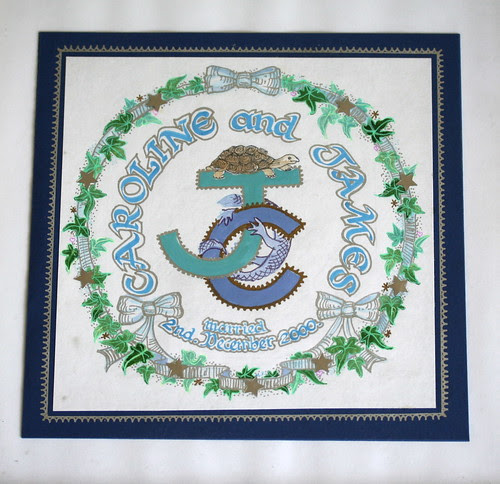 Caroline, hi! thanks for visiting my blog, I am soo excited to hear from you.. I am off Cornish ancestry, I guess you have gathered.. living in Australia.
Haven't found the runes yet and I don't know how to dowse ...
would love to 'talk' more. You can email me if you would like..
now I am off to read this post properly and maybe some more of your blog.
(I am off to Cornwall next year!!)

miss*R - I've not much here about my shamanic activities... though I have started to blog a little about the energy work side in

One of the problems with what I'm doing is there are no texts, no sources I have to do everything by experiment...

Thankyou for a very enjoyable post Caroline! I couldn't understand why a June Wedding would be so 'special' until you mentioned the longer days and worked out it's summer there in June! You look gorgeous in your dress and Ted very handsome :) It sounds similar to mine in regards to being relaxed but OHHHH a fort as the location would have been FANTASTIC!

You looked so beautiful, Caroline. That blue was a great choice of colour - and a tiara! Aw... it makes me all teary to see this. Lovely memories to share. Thanks!

Anonymous - Thank you for the compliments. (I hope you mean Jim not Ted!) The fort was a wonderful venue - it suited us very well in its informality and being able to stay there both the night before two nights after.

Imelda - Thank you - I felt in beauty that day... and for once was relaxed about being the other side of a camera... not often that's true!

Oh Caroline - you look radiantly beautiful! A wedding is the perfect occasion to treat one's self to a tiara! The blue dress is stunning, as well.
Love the self-portrait's of your nephews - adorable! How good of your guests to organize themselves for the group portrait. We opted not to have a professional photographer either. It worked out rather well for the most part (there was a nearby trashcan that kept popping up in the background of many of ours) - I think your photos turned out very well though!

Thank you so much for dancing along with me! I enjoyed reading about and seeing some of your photo memories, so very much~XOXO
p.s. I have mine up there now, along with the links I've received so far~

Tinker - thank you for having such a fun idea - it really was the spur I needed to finally put something on the web about it. And I'm blushing now... all the compliments would go to my head if it wasn't that this was all over 7 years ago...

Great post. Like your dress very much. Everyone looked color coordinated as a group. The candids make me smile.
A toast to love!
xo
Constance

like this little photo of you with your antlers. ;-)

Hi! Your wedding sounds lovely. The location of Cornwall seems very romantic.May you enjoy many happy years together!
Cheers!

What a beautiful, intimate wedding. I think you did a great group shot! Loved the venue you chose too.

What a lovely setting to have a wedding. I love the UK and so far have only seen a snippet of it. One day we hope to go back and see all the places I've dreamed of.
Your wedding story was so sweet and I loved that YOU did the proposing!
I also did our wedding story.
Nice to meet you.

Your wedding sounds perfect. I love that you didnt have a pro photographer. It must have made things more relaxed and fun. I'm jealous of your tiara. I love them now, but never thought to have one for my wedding. You looked beautiful in it for the wedding.

Caroline I danced over from Tinkers. Love your story and pictures. My youngest daughter used dark blues(navy, Royal and such)and silver for her wedding. She wore a silver dress. This was her first wedding but she did not want it to be the norm.

What an handsome couple! :)

Lapin stole the worlds from my mouth... hehehhe! :)

I just read this post finally!
what a fantastic wedding you had... Cornwall! a dream :) xo

Ooops! I meant Jim! WHO is Ted?

Constance - thank you - the colour coordination of the group was entirely unplanned and helped somewhat by the fading light.

Gemma - Cornwall is a romantic place and I'd recommended it as a wedding venue to anyone - though it takes some organising...

Tammy - thank you - I was lucky the group shots worked at all!

Lisa - maybe I'll tell the proposal story in full one day... good to meet you too.

artbrat - Collage in a tiara to all your photos and it will be like you'd had one.

Lapin Poulain - thank you - not quite up to your own standards of course...

MP - he was too quick for you was he?

Miss*R - yes, Cornwall was the best possible place to be married!

Anonymous - Ted is Jim's mother's man friend (in the group photo but not very visible).... or my one of my neighbour's cats (not at the wedding)!

Very sweet tiara I love the dress and cape, you looked truly regal! Sounds romantic and intimate, my favorite kind of wedding! I love some of the casual aspects, it makes everyone feel so comfortable and sometimes creativity is born in freedom! Hence your fun photos!

Thanks for popping by my blog and your kind comment!

Anonymous - maybe! (Probably not for the cat then...)

Giggles - thanks for your appreciation - I've been enjoying reliving this day!

What fun! And the first thing I noticed was the sparkly tiara so I'm glad you mentioned it. I loved the glimpse of your wedding. Thanks.