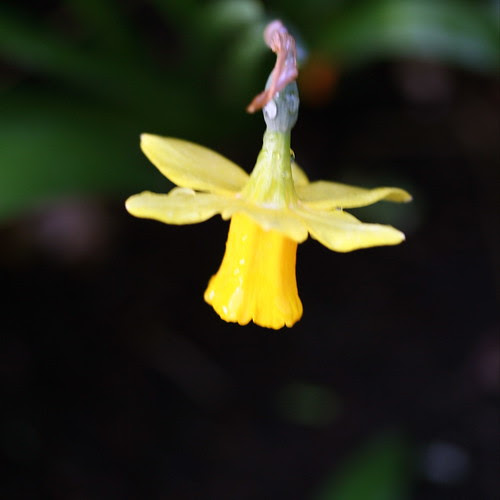 On the radio this morning I heard Hugh Grant mentioning the Marie Curie charity. Their nurses had made it possible for his mother to die at home, with her family around her, rather than in hospital.

They have a "daffodil appeal" running throughout March.

The last time I heard Hugh Grant on Radio 4 was ages ago when he was doing his Desert Island Discs. I was immensely pleased that he had selected as one of his 8 records "The Flopsy Bunnies". This was a childhood favourite of mine too. I'm trying to remember now how it goes... We're a happy family, yes a happy family, and we live at the foot of the old fir tree... there's Flopsy, there's Mopsy - how could they be sweeter?, funny little Cotton-tail and Peter!... something like that.

Ever since I've had rather a soft spot for Hugh Grant... And since I mostly don't remember film stars names the simple fact I can say this shows he is up there with Clint Eastwood for me! (Johnny Depp would be in there too if only I didn't keep on getting him muddled up with Brad Pitt... and if you don't know how anyone can do that maybe you'll see how weird my memory banks must be... )

Anyway, this is all part of a big series of synchronicities that are currently running for me.

Yesterday I just happened to find this on YouTube - I found it looking for lyrics to go with a photo someone had put up on flickr of a bunch of sad withered red heart-shaped balloons. The video includes Hugh Grant in Love Actually dancing around.

On Radio 4 this morning he mentioned that it might be a cliche but the Marie Curie nurses really are angels. I went out to take a photograph of a daffodil to illustrate the Marie Curie daffodil appeal and it turned out itself to look like an angel too!
Posted by Caroline at 2/26/2008 08:48:00 am

Email ThisBlogThis!Share to TwitterShare to FacebookShare to Pinterest
Labels: synchronicity

what program was he on?

He was on "Today". The breakfast news programme. It is available on their listen again service.

I have a soft spot for Hugh and heard he was coming on, but then I had my breakfast and missed him - will try to listen again too - nice daffodil - is it spring yet do you think?

I think the coupling of Richard Curtis and Hugh Grant has created some of the funniest, most refreshing dialogue in movies for 20 years. I once heard this great story Hugh Grant told that was a perfect example of the difference between Yanks and Brits. His parents were at some posh dinner and someone turned to his mother and said, "Do you have any children?" When she answered that she had two sons he then asked what they did. "One is an international banker in New York and the other is a film star." Oh, really?" answered the man. "And what bank does he work with?"

PS I read on another blog that Johnny Depp is moving to Bristol.

heatheronhertravels - I hope you've had a chance to hear it.

And I hope Johnny Depp doesn't expect me to recognise him... unless he dresses up as a pirate of course!

I'm hopeless with names and numbers Caroline! Just more room for remembering lots of other things instead ;) Love your 'Angle Daffodil' photograph! I have tried to grow daffodils here unsuccessfully but can only manage one at a time on the windowsill - just not cold enough here.

I see a fairie sitting atop of your Daffodil!

It does look like an angel - or a faerie! Either way, it looks lovely, and is a sweet synchronicity. As is the 'Pop Goes My Heart,' video to go with the popped red balloons. I love synchronicities, not only my own, but even when they're someone else's they're still a nice reminder of something greater going on in their lives...Glad you're finding some wonderful ones.

Caroline - did you really mean internal banker? I doubt it! :-)

Anonymous - I also can't remember quotes, or lines in plays - completely ruined my otherwise obviously best career in the theatre!

Tinker - Glad you enjoyed my synchronicities... and that you found the other ones too!

Anoymous - ah yes I vaguely recall we've been there before...