Well the first bean that comes to mind is that I really don't like eating beans; at least not much... but growing them is fun - they grow so well and I love the way the climbing ones curl around their sticks and lift themselves up. Maybe I should just grow them for their flowers. I'm sure I read somewhere that when runner beans were first brought to the UK they were grown purely for their flowers as their beans were rumoured to be poisonous. In trying to confirm this I find a site that states that runner bean flowers are edible though sweet pea flowers are not.

Which brings me to my second bean. When I was young I was always trying to find ways to earn some money. One of my least successful attempts were the sweet peas that I planted in garden earth in plastic coffee cups. They germinated and grew but the earth went all hard and cracked. I tried to sell these unappealing specimens but no-one bought a single one. (An equally unsuccessful venture involved tracing pictures from a book called "Le Petit Lapin" then stuffing them in envelopes and attempting to get people to buy them without looking first... )

And for my third bean... I used to regularly spend my lunch hours with a few others exercising under the expert guidance of Mr Bean. He was a rugby coach and discovered that we were not up to running to his standards but a hard core of us regularly turned out for circuit training. As he was the rugby coach for a nearby RAF station we got free admittance to their gym provided it was available.

My fourth bean is the more famous Mr Bean. I can't stand him! And that's as much as I want to say about that one.

My fifth bean... I once made a small bean bag in the shape of a frog. But I filled it with grain that we had for feeding the chickens. It got left out in the rain and the grains sprouted. Which the end of that bean bag.

My sixth bean.. Another bean bag... I have one of the kind you can sit in. A turquoise one. I like to use it when reading in bed. Or in the sitting room too. Much nicer than ordinary chairs...

My seventh bean... One of my favourite stories as a child was "Jack and the Beanstalk".... maybe that is why I like seeing beans grow.... but I was always frustrated that all the heroes in the fairy tales were male and the heroines had to be saved. When I was involved in creating and putting on a pantomime I cast a woman as Princess Connectionism and she saved the sleepy prince in our version of Sleeping Beauty.

My eighth bean... If I have to eat a bean of some sort my favourite is the chickpea. Or maybe its that I like the garlic that goes with it in such things as houmous.

My ninth bean... I do like jelly belly beans... My favourite flavour is strawberry cheesecake... But I've not had any for ages... Too sugary...

My tenth bean... Is my favourite of all and is the cocoa bean.. because that of course is where chocolate comes from!

Now I've bean really mad here and insisted on spilling only beany beans. One of the last things Melba mentioned was that she enjoyed being tagged because it made her feel loved. So on that principle I'm going to tag, in no particular order:

And having mentioned Andrea I really must also mention her small art blog. At the time of writing these ones are still available for $100 + $10 p&p - world wide delivery is also available - enquire for cost of shipping outside Canada. 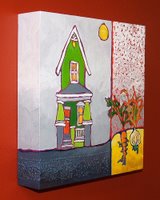 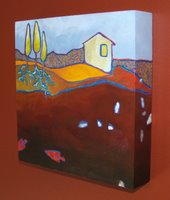 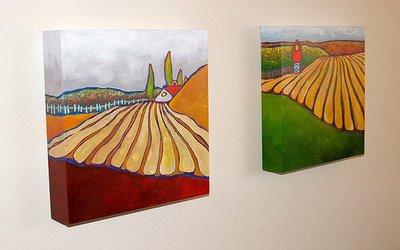 My, my, you ARE full of beans!! I got the tag so I shall have to spill mine shortly. Well, not that shortly as I won't have much time over the next few days as I'm off to the big smoke for a couple of days.

Thanks for the plug, Ms. Bean. As for the tag, this looks like it requires some energy, so I'll have to muster some up (mustard bean?).

Who knew one person could have so many beans? What a whimsical approach to the tag, you literalist! I love the sprouted beanbag, by the way. And oh, LOVE Andrea's paintings!

Bean there, done that. Check it out.

Reluctant Nomad - only metaphorically full of beans of course... have fun whilst you are away.

Andrea - I am a real human bean... I only just managed to avoid that as one of my facts.... is there such a bean as a mustard bean?

Laini - I wasn't sure I'd make it through to ten... and I love Andrea's paintings too... she needs more and more people to love them!

Wandering Coyote - wow I'll come and see what you bean up to.

I feel so loved. But it'll have to wait for next week, because I've got a few other posts on deck already :)

I love this funny post... And chocolate beans! BUT Mr Bean made me laugh many times... With his tiny car, his poor TeddyBear and his crazy Christmas Party.... :) But I can understand why some people don't like him.(My mom hates him). Sometimes , he's eeeee too much! YEP INDEED!
And thanks for the invitation on Flick'r. I'm now in this nice group! I will find some faces soon!

Let's not forget that you are wonderful human bean, too.

Viking - glad you are taking it in the right spirit!

Merlinprincesse - I'm obviously with your mother on the Mr issue... would you like to be tagged?

Kyknoord - thank you, and so are you too.

Thanks for playing along. I love beans. All kinds. Bean and pasta soup, black beans in burritos, chili, and on homemade nachos. Chick peas in just about everything. My daughter loves beans too. The only bean I am not that fond of is lentils. We ordered lentil soup with our Indian take out and I really didn't care for it. I think my taste buds are changing as I get older. I am more open and willing to try things.

How clever you are, Ms. Caroline. I've taken up the challenge. Such fun. I can feel the love :-)

I spilled 11 actually but one doesn't count because it was filler. And I'm going get you for that tag, you just wait, when you least expect it, tag, tag, tag ;D

Melba - glad you don't find beans disagreeing with you... I was vegetarian for 10 years and had enough beans then to last me a lifetime ;-)

Nan - thanks - glad you felt it! I'll be over to read them when I'm back on again (this is a quick pitstop!)

Merlinprincesse - and you have obviously had more than enough tag-type love - glad I didn't subject you to it originally!

Janey - well done - and like Nan's I'll be over to read yours as soon as I can.

Ha! Great beans...I too as a child was always trying to sell things. Pumkins from my grandmothers garden always sold best.

Caro, that was very inspiring!
Beans? Best memory is the Farting Competition in Blazing Saddles!
Bean there?

i love that you posted only beany beans. brilliant!

What great beans! I love your business ideas and wish I could have bought a sweetpea or Petit Lapin reproduction from you! You also made me think of when I was a kid and my mom had us put a bean on a wet paper towel and over the passing days we could watch it sprout. I remember that with joy.

Love all the Small Art & all the art!

Delightful...Love this take on spilling the beans

Andrea - thanks - I wish I'd had pumpkins to sell! I'm sure they would have been good.

Cream - I'd forgotten Blazing Saddles... hmm and the more I think about it the better it is left forgotten... though that's less to do with the film and more to do with the company I was keeping ;-)

Jamie - I wish you'd been there to buy one! I'd forgotten about growing beans like that - thank you for the reminder!