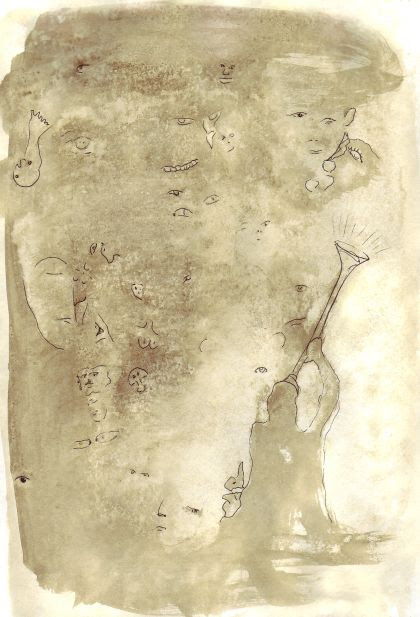 On Saturday I bought a new sketchbook - its A4, has sturdy covers and is ring bound down the long side - just what I was looking for. I immediately painted the first few pages with sepia acrylic ink which I squidged around - often by shutting the book up and then opening it again; so making two similar, but different, patterns on facing pages. This ink dries very quickly so some brush marks were often left despite this blotting. (You can see that I'm still being influenced by that Rorschach Monster blot I did almost a month ago ;-)

Since then I've been playing with the pages finding faces in there. I've found that I can do a little, leave them, then return and find new faces I'd not seen before. This is a page that I've only worked with a bit so far and a detail from it. 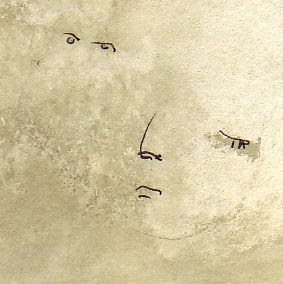 And now I've found that ArtsyMama is just starting an altered book challenge, inspired by A Book of Dreams. ArtsyMama is going to post one new technique a week on Wednesdays. As I already have the themes I want to work with this focus on techniques suitable to go inside a book seems synchronisitic and potentially very helpful. She has also made it clear that its fine to start with a blank book. There is still time to join in if you are interested too! See her invitation to join in here.
Posted by Caroline at 4/24/2006 05:41:00 pm

Neat! In the bottom photo,I see a sad man on the left of the page, who shares the mouth and part of the nose of the face on the right.
I see all kinds of things in my bathroom floor.I once asked my more artistic friend to see what faces he could find in my floor.He found many I hadn't seen.Someone may have found it strange if they had found us crouching in the bathroom floor, with pen and paper.

Janet - I see the sad man too now that you mention him... Bathroom floor face spotting is one of my favourite occupations too!

Hey Caroline, this is fun...look at the evil man in the top left corner...

Janet - if I'm looking in the same place as you that looks a bit like a tiger to me!

I meant lion - there are no stripes...

Look to the near left of the left eye you have marked, there is an eye with cocked eyebrow, then big nose going down to that little dark scribble, and his right eye is looking to his right, ( although he does have some lizard looking thing in his forehead) :0)
I must stop this and do some housework :) :)

Fun :) And I think I see a Viking somewhere in there...

Viking - I can see one too and he has a great big smile!

Bathroom floor! haha... I asked my friends/family about the weird faces on the bathroom floor and they looked at me like I'm psycho. Apparently, no one in my family looks at clouds either! :) I do this all the time.

What a fun game. I always see faces in trees. Especially when it's windy.

Fun. I need to do this sort of thing more often: get off the production treadmill/schedule I've set myself and just let my mind wander...

I'm guessing you also enjoy finding patterns in the clouds.

Janet - feel free to print out the image and mark in your own seeings - I think your evil man's big nose is my lion's nose... the eyes coming out from a lowering brow could easily also be seen as evil. Hope you got whatever else you needed to get done, done yesterday!

Tara - I once made the mistake of mentioning the faces in the ceiling to a doctor when I'd been stuck for hours on a table (they were worried about my back and keeping it painfully flat!) after a minor car accident... I think it added to their worries whereas of course to me it showed I was fine! And I was.

Krista - I've been noticing lots amongst the blossom recently too - trees are excellent places to spot such things. Did you see the tree stump face in my post below?

Andrea - there needs to be time to feed the image libraries in your brain as well as churning things out.

Kyknoord - I love it! And so does Jim who spotted the cloud rabbit I posted last year

Love this! I always see faces and objects in the texture of things. This is something I must try!

Caro, this looks like cave paintings!
Actually, I can see a boy scout (Top right) and a happy bunny!
Jesus, I can see at last!

Joy Eliz - I hope you have fun - I've just bought a brown pen to see if that helps make lines that are a little more subtle.

Cream - I've wondered about that - whether cave paintings came from emphasising images that were hinted at by the formations. I still haven't spotted Jesus ;-)

What a fun idea. I am going to have to try something like this (when I can find the ink and/or a sketchbook in among the mayhem).
:-)

Cool. I've been doing this with photos of surfaces lately. I'm inspired to do more. Excellent job!

Marie - I hope you do - I'd love to see what you produce.

Steve - have I missed these on your blog?

The top picture definitely contains a mad bull/buffalo/wildebeest who is wondering why someone is trumpetting into his ear.

Reluctant Nomad - he'll probably be very mad with all that noise...

I have this thing where I just sketch faces all the time. I have no idea who they are or where they come from. Cool work though.

Oh, this is VERY fun!

I think this is so neat. Sort of like starring at cracks on the ceiling and imagining faces there.

love it! the sepia ink looks like old paper or tea stains...and the faces...very cool. :)

This is very cool! It reminded me of the sand on a beach and what youc an draw or see in simple lines.
Beautiful!
a.

Tony Larocca - I sketch a lot faces too... when I used to go to meetings they were influenced by the people I saw there as I doodled but now I still do it without any models.

Jessie - thank you - yes I'd thought about it being like old paper... I was wondering if I might end up with a treasure map appearing... ;-)

Andrea - I've not spent enough time on sandy beaches obviously - thanks for the suggestion!

Looks like fun! I'm always so "precious" with my sketch books and journals, and afraid of messing them up. But I love other people's fat painty books, so full of texture and life!

This is a very fun techinque; it would be great to do while watching tv or waiting for an appointment. Like the color of the wash too

these are incredible!!!! wow what talent and it's so easy to see that you're having fun as well...cannot wait to see what lies ahead :-)

Haha, I do this with the curtains in front of me, see faces in them.

Laini - I found it helped to have bought this sketchbook specifically to be messed around with...

Ascenderrisesabove - I get too absorbed in it to pay attention to over things whilst I do it.. you of course may find it suits you well in other ways.

GG - curtains? I don't think I've got any that do this well for this... that obviously needs putting right!