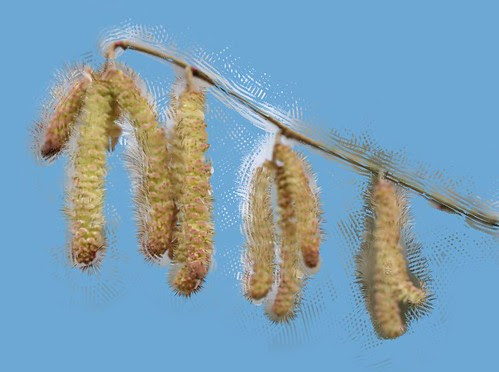 Another plant using same style as previous two days. (The eraser rake I'm using was made by using the brush creator and changing the action of a rake to one of the erase actions.) I experimented with a coloured background but I'm not sure about it...

I got this over at Andrea's Colouring Outside the Lines. I didn't do as well as she did, but it was a fun exercise anyway (I copied that bit too...;-).

The Da Vinci Code - Dan Brown
The Catcher in the Rye - J.D. Salinger
The Hitchhiker's Guide To The Galaxy - Douglas Adams
The Great Gatsby - F.Scott Fitzgerald
To Kill a Mockingbird - Harper Lee This recently went from probably not to probably will read it sometime...
The Time Traveler's Wife - Audrey Niffenegger - this has been recommended by several people and is on my list to acquire and read
His Dark Materials - Philip Pullman - fabulous triology I particularly loved the first two books...
Harry Potter and the Half-Blood Prince - J. K. Rowling I've read all the Harry Potter books so far but was so put off by this one that I won't be reading the next... not even to complete the set? Well maybe...
Life of Pi - Yann Martel - I've got this on my shelf as an audio CD does that count? But I haven't listened to it yet...
Animal Farm - George Orwell
Catch-22 - Joseph Heller - read it ages ago I don't remember it at all now...
The Hobbit - J. R. R. Tolkien
The Curious Incident of the Dog in the Night-time - Mark Haddon - its there but not read yet, not sure why not...
Lord of the Flies - William Golding
Pride and Prejudice - Jane Austen - I'm a Jane Austen fan though I used not to like her at all... so I'm aware my tastes change!
1984 - George Orwell - I've read most Orwell, was once a huge fan (tee hee I left Andrea's comment in here as its true for me too..) - not sure that it is on my bookshelf but it ought to be..
Harry Potter and the Prisoner of Azkaban - J. K. Rowling
(One Hundred Years of Solitude - Gabriel Garcia Marquez)
Memoirs of a Geisha - Arthur Golden
(The Kite Runner - Khaled Hosseini)
(The Lovely Bones - Alice Sebold)
Slaughterhouse 5 - Kurt Vonnegut - not sure - I may have read this in my dim and distant..
(The Secret History - Donna Tartt)
Wuthering Heights - Emily Bronte
The Lion, the Witch and the Wardrobe - C. S. Lewis
(Middlesex - Jeffrey Eugenides)
(Cloud Atlas - David Mitchell)
Jane Eyre - Charlotte Bronte
(Atonement - Ian McEwan)
(The Shadow Of The Wind - Carlos Ruiz Zafon)
The Old Man and the Sea - Ernest Hemingway - I tried this and didn't get past the first paragraph...
The Handmaid's Tale - Margaret Atwood - I've got this as audio
(The Bell Jar - Sylvia Plath)
Dune - Frank Herbert
Posted by Caroline at 4/06/2006 07:06:00 pm

You, as an artist MUST ABSOLUTELY read 'The Time Traveller's Wife'!!!!

your magnolia is beautiful. i am going to do this meme only to embarass myself as an English major and spur myself into reading more. i've read very, very few of these books...

I really like what you've done with these flowers.

I cannot do the meme because I don't have a toolbar due to my old browser.

However, The Time Traveller's Wife is a MUST, as are Middlesex, Memoirs of a Geisha, and The Handmaid's Tale. The Kite Runner is excellent, but disturbing, as is The Lovely Bones. Curious Incident is a very quick read and very good.

Nice! I love the magnolia, too.

I'd really like to do the meme, but can't figure out how to underline in blogger. I tried doing it in word and copying and pasting, but it would not copy the formatting. arghhhhhh!!! I gave up after 3 tries :-( Time Traveler's Wife is on my list to read as is the Life of Pi. I love most everything I've read by Margaret Atwood. I used to read tons more before I discovered blogging!

Glad to see another Philip Pullman reader! I would attempt this list but my technical skills don't extend to underlining and bolding! As for Lovely Bones, it's terrific, and interestingly, is the new movie Peter Jackson (Lord of the Rings) is working on - very much out of his usual. And Life of Pi, it was so so until halfway through, then WOW. One of the most powerful books I've read.

YOur plant paintings are lovely!! BTW, awesome book list!! I love Philip Pullman's books a lot. One of my favourite is ClockWork. Speak about children fantasy ... Diana Wynn Jone's Chrestomanci series are very fun read too. :)

Great list perfect timing. I have just about read through the chick-let books I got on eBay.

Many thanks,
The Tart

This is a great idea! But I have to admit I am not your 'normal' reader. I am so picky and if everyone says its a 'must' than I usually avoid it like the plaque.

I loved The old man and the sea, maybe because I love the sea and fishing...but the end, oh the end, loved it.

And To kill a mocking bird too. Loved the children in the book.

As for Lord of the flies, I use it daily to describe some of the 'Jack' politicicans I see here.

If I tried to make a list of the books that are overflowing out of this place, I'd be here all week. I think they multiply when I'm not looking.

I am loving your flowers and plants!!

She's gone quiet again. Where is she? Come back!!

Great idea to use a rake!
I loved the Kite Runner and Middlesex! Cloud Atlas was bloody hard!
Life of Pi and the Curious Incident are a must!
Harry Potter, thanks but no thanks!
Might have to do meme one day...

Caro: Just posted a pit of my magnificent magnolia.

Add The Joyous Season by Patrick Dennis author of Auntie Mame. A wonderfully funny book...short too!

I'm with wandering coyote....where've you been?

Hope real life is going okay. I have invented a very poor joke. Who is the smallest detective in the world? ..Molecule Poirot. That must be worse than your singing.

Wow all these comments! Thank you

Andrea - it was fun list and it helped me learn how to do underlining and things...

Reluctant Nomad - I've ordered it though it has yet to arrive.

kg - I had the advantage, when a student, of living with people studying English so I borrowed their books but didn't have their essays etc...

Wandering Coyote - I don't have the toolbar either so I had to learn how to add in underline etc in html. Thanks for your book comments!

Nan - yes blogging does take up reading time doesn't it....

Laini - looks like I'd better finish Life of Pi and get hold of Lovely Bones...

Alina Chau - thank you - I've not read Clockwork - I'll look out for that thanks and I'm sure I've read some Diana Wynn Jones... not sure what though...

Jocelyn - thanks - perhaps you could put together a chick lit list?

Joy Eliz - I know that feeling but don't let it stop you trying something you fancy anyway - oh oh how will you react to that? :-)

GG - I just couldn't read the language for some reason (re - the old man and the sea)... Lord of the Flies is a scary book - hope they are not quite that bad!

Tony - books do that... especially when you are not looking... its their way of crying for attention.

Wandering Coyote - sorry, sorry... if I'd known I'd be off-line so long I'd have excused myself in advance...

Joli Noir Perle - okay tart I do know this is you too...

Modroom - real life must have stopped as I seem to have been able to get off it and am back on line again. Molecule Poirot is the smallest detective in the world? Very funny! And yes it must be worse thank you!