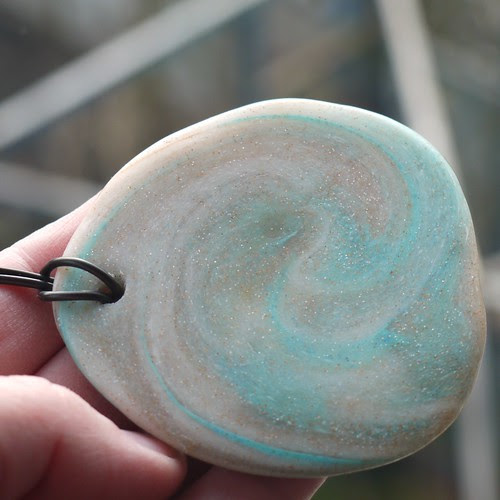 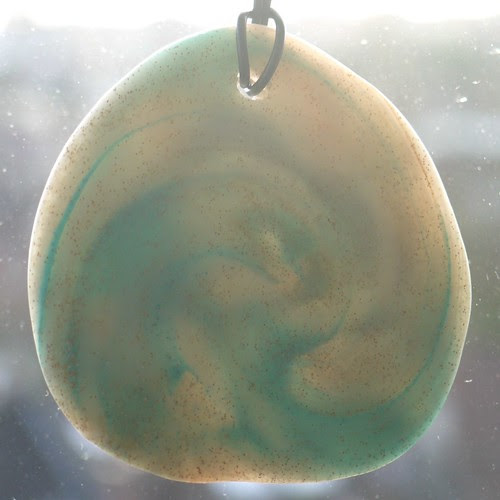 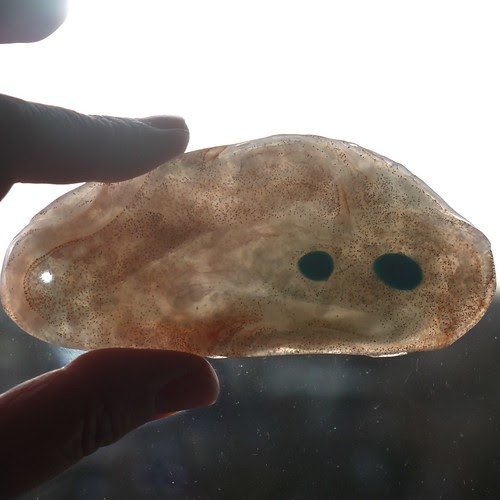 Over the last two days I've been struggling with some translucent polymer clay (Cernit) it was VERY soft, even after spending the night in the fridge... it made it impossible to use as I'd planned in thin slices... so I had to adapt what I was doing... these two are the results.

I wish I hadn't put the opaque blue dots in the second one - they don't really work... I think it worked better in the swirled first one which also had standard white in so not so translucent anyway... I might chop the blue bit off or drill them out... not yet decided.

I actually really like the blue dot experiment. The piece has a mysterious amoeba-like quality to it. Like cells in the universe!

Camilla
(I've been away from my Soul Shamans blog for a number of months...can't find my regular signature for posting! Great to see what you are up to!)

I haven't seen the translucent polymer clay before. Though it may not be working as well for you, it looks rather lovely in the photograph.
I recently read about a faux bone material, that sort of works in the opposite manner of polymer clay - it's hard when cold and becomes malleable when it's heated, though you can sand/drill/carve etc with hand tools when it's cold, as well. Sounded rather interesting, I can't recall the name of it at the moment though.

Camilla - away from your blog? Seems that is a common happening around here too!

Thanks for encouraging me about the blue dot experiment - I was planning to drill them out but I'll keep it as it is for a while longer. Let it become familiar instead of simply not what I was hoping for...

Tinker - thank you for all your comments... I'm not sure that I really am back... I've not got back into blog reading other than looking at a few polymer clay ones!

I've a book that mentions faux bone that is indeed called just that: http://www.fauxbone.com/

Though I also have a book with a suggestion of how to imitate bone in polymerclay...

Yes - I've just had a look, and that's the same one. For some reason I had thought there was more to the name than that...
Whether you're all the way back, or just popping in - always glad to hear from you whenever you appear in the blogworld.
Happy sculpting!

Hi Caro, I'm still here, I was waiting patiently for you to start blogging again.

I've been experimenting [in my mind], with things to do with plastic drinks bottles.

You're a woman of many talents! When I go away for awhile, I always return to find something new!