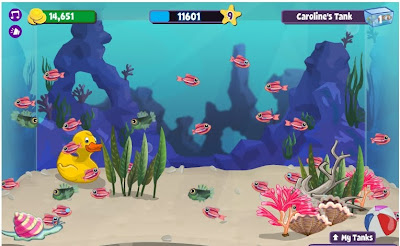 After writing that post, Jim got our connection to the web back up so I could publish it - unfortunately I was then unable to get into my farm and haven't been able to since - I'd thought it hilarious when I'd got 27 green alien cows into a dairy that was only meant to be able to take a maximum of 20 cows in total. 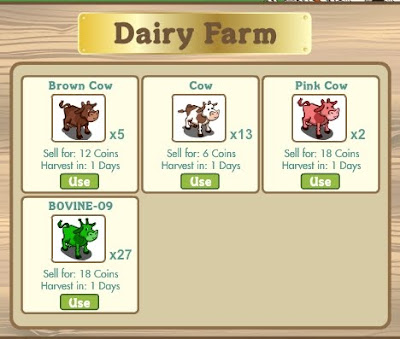 From browsing the web it appears that they have fixed the bug that allowed this to happen but that those of us who had seriously overdone the stuffing have not been able to load our farms since. Whilst searching for more help on the issue than was coming from the makers of the game (Zynga) I discovered that they had just launched a new game on facebook - FishVille.

So rather than sulk too much longer I thought I'd play with fishes instead. And it is very relaxing - just like watching a fish tank - well almost.

I didn't take any really early screen shots - but here is one when I'd got to level 3 and my first neighbour had joined me: 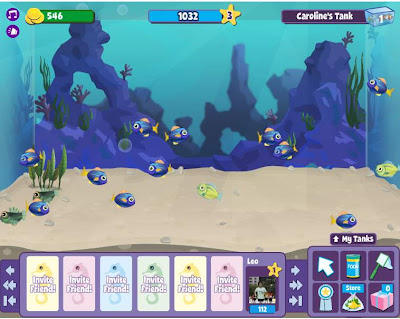 The idea is to buy fish eggs and feed the hatchlings enough that they reach maturity when they can be sold - in fact they can be sold as soon as they stop being babies - but for some fish that in itself takes a day - for others it takes as little as 3 minutes. - you get more for them if you keep them growing and sell them as full grown adults - provided you can keep them alive!

They let you know when they are hungry like this: 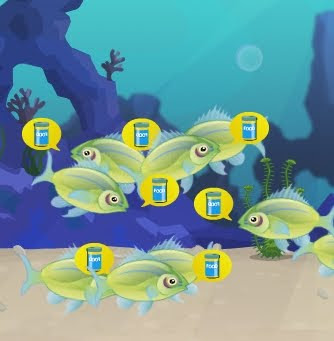 But they start clamouring for food like this well before they actually need feeding... I did notice one neighbour had a fish with a red bubble asking for food - presumably it was really hungry. If you don't feed them in time they die and you have to clear up the dead fish.

Neighbours I hear you ask?

Well that's a concept from FarmVille and being fairly closely modelled on FarmVille, FishVille also has neighbours. People who are your friends on facebook and playing the same game can become your neighbours.

You can visit each others tanks which is fun in itself also your neighbours (or rather neighbors as its an American-written game) can send you gifts to decorate your tank: 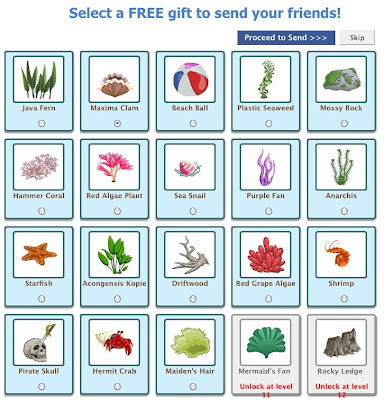 What you are able to send increases as you go up levels.

The variety of fish eggs you are able to buy also increases with levels:

My goal yesterday was to get to level 8 so I could buy the clown fish. I managed that (just) and got up to saleable clownfish overnight: 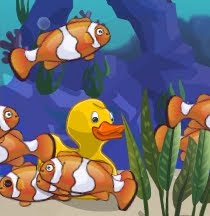 The image at the top of this posting was how my tank looked when I started to write. Now after writing all of this the fish have grown: 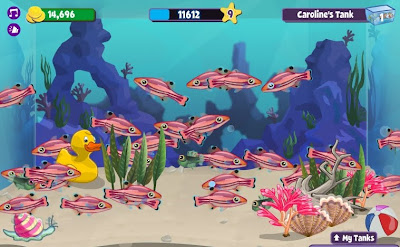 Oh oh... no matter how intriguing I've made this sound I must also tell you that the screen is now saying:

Update: I was suspicious from the wording of the above notice that the issue might be political rather than technical and it appears that facebook has pulled the plug on the fish tanks because of advertising violations. At least that's what they are saying at techcrunch.
Posted by Caroline at 11/08/2009 06:34:00 am

I've so far been avoiding the apps like Farmville and Fishville, because I've been afraid that's all I'd ever end up doing on the computer...This looks like such fun though, and guess what I've painted now - mermaids! With fish! Just posted the owl earlier today, so I probably won't post the mermaids till tomorrow or the next.
Happy fish-farming!

Tinker the ever wise - you are so right.

I'm looking forward to your mermaid.

Aha! So it was "colouring outside the lines" that got you in trouble! :)

Andrea - you'd be disappointed at the lack of fish bones in FishVille.