Secret #3 of 12: Following Your Fascinations 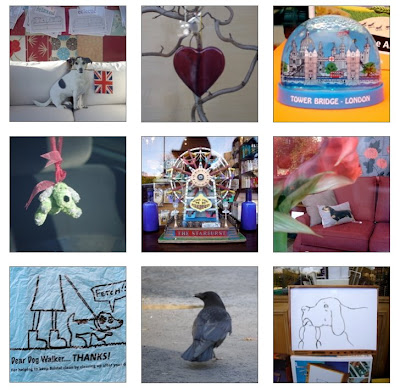 Gosh its already Friday! The start of the 3rd week of 12 Secrets of Highly Creative Women - and no, there is still no sign of my copy of the book... of course that means there's more time to read your blogs and glean both inspiration and ideas from them!

I feel like I'm being influenced by the group despite having no idea what is coming next.

You see yesterday I took a big, expensive, step... one that I had been putting off... I went out and spent rather a lot of money on a new camera... its not that I don't already have one (or two...) but that what I had meant I kept on compromising - I don't often take my D-SLR out with me because its too heavy for me these days and although I like my compact a lot its quality is not that of an SLR's. Jim had found a potentially really good camera for me a couple of months ago but I was hesitating about buying it, I hadn't even looked at it... but then I got a series of little nudges that pushed me and yesterday I got it!

When I say nudges I mean things like this. I'd actually started to seriously consider going to see it though I'd let a day or two go by without making the time to go to the shops. Then on Wednesday I got out to the park earlier than usual and there wasn't anyone there that I knew. But it wasn't long before Teasel decided to play with a Spaniel (they are giving my shadow far too many legs in the photo above) and I started to walk around the park with the Spaniel's owner. It turned out she was just about to drive up to Pershore...

Once upon a time, I was a member of Pershore camera club (despite never having lived there) and that year I won their photographer of the year award... At the time I was printing my own black and white photos and taking colour slides... All very serious stuff and a long way from the sort of photos I've been taking recently...

All of which brings me to one of my major encouragers - synchronicities!

When I did the Artist's Way for the first time in 1996 I really got into synchronicities and I haven't looked back since. Some I note with amusement, others get me thinking, all of them help me feel supported.

Another real encourager is to do something different. Anything.

Break a habit. Try something new. Switch media. Switch from words to images or vice versa. Change subject matter. Play with something.

Walk a different route - taking new paths is a great metaphor for getting unstuck - I recently discovered a strange little footpath I'd never been down before - and we've lived here since 1996!

Jamie suggests that we be brave and take a risk this week - having already been brave and bought the camera I'll have to pick a completely different sort of brave to do next... now I have been wondering about putting streaks in my hair... or buying some different clothes... or dyeing some of the clothes I've already got... mmm... seems like these are all about changing the way I present myself... and yes they all feel potentially risky...

Saturday Update: Today a book came. Unfortunately it is the wrong book. Looks like the creative urge got in and muddled up the packer!

The original seller had it for sale on amazon again - this time I emailed them before ordering it - they say they do not have it in stock - however they are still advertising it now!

The camera is what I would call an intelligent calculated risk that is going to push you ahead creatively. COngratulations. It also seems like by buying yourself what you need, you are really honoring the artist inside yourself.

Nice job! I don't think you need to do anything else, but if you do put some crazy color in your hair, be sure to take a photo and show us! What fun. You just might start something and all us 12 secrets bloggers will have wild colored hair by the end of the 12 weeks ;)

Enjoy it and enjoy going wherever the lens leads you!

oh do go out and have some streaks/highlights! I had some lovely purple ones done just before Christmas and I love them...

I loved the Artists way.. I am thinking of doing it again after we have finished with this book.

Well done! In my opinion one can never have too many cameras! (Says the woman who turns the heat down too far in winter... :)

You're inspiring me! I am starting a photography course this week and soooo want a new camera. I just told my hubby this and he said "so that's where all my ten dollars go??" LOL
Hmmmm.... I am getting such strong urges to camera shop!
Kim
http://kimssoulcollagecards.blogspot.com/

Way to go! And I hear you on the weight of SLR cameras. I love my old Minolta but man, I can't carry that anymore with all the lenses. I'm glad you found something that works and you're getting back into the spirit of photography! I can't wait to see all that you capture with your new creative tool. I also hope the book shows up for you soon! The RIGHT book.

Bourne- Talk about a risk taker! A fascinating one at that! :)

Love the shadow photo! YAY! on the new camera. :)

Kavindra - I certainly did quite a lot of calculations before buying it - I hope they were intelligent ones ;-) Crazy colour? I wonder what would count as a really crazy colour... mmm...

Tanaya - I do hope you get one soon!

miss*R - Purple? That's a wild idea! And good luck with redoing the AW if you do do it again - I've gone through it several times now and each was exciting!

Andrea - The financial situation here in the UK means that its pretty difficult for savings to keep up with inflation at the moment and with the pound plummeting I thought I'd better spend some whilst they could still buy me something! (Jim keeps putting the thermostat down to 17 deg C (63 deg F) and I keep on putting it up to 19 deg C (66 deg F)... still not all that hot!)

Traveler One - Camera shopping is fun though paying the money over is quite scary!

Sacred Suzie - you were one of the nudgers you know... I'm wondering if I'll ever get the book... I think the universe is having a bit of a laugh right now... I've never been sent the wrong book before!

Genie Sea - I love that take on the book fiasco! Does it mean I need a whole new identity or was that the first book... maybe I'll have to read this one...

Enjoy you new camera! How exciting!

"Break a habit. Try something new. Switch media. Switch from words to images or vice versa. Change subject matter. Play with something.

Walk a different route - taking new paths is a great metaphor for getting unstuck" -- I really like this! Thank you.

I love the idea of synchronicities as an encourager. Synchronicities thrill me - I love it when they happen. Definitely very encouraging! Your photos are lovely - sounds like you'll have a very good time with your new camera!

What wondrous shadow creatures you've found through your lens!
Synchronicities are always encouraging signs, I think - glad you're finding some especially good ones, Caro.
Wishing you good luck in getting the right book!

I'm sorry, but I giggled when I saw the book you'd be sent instead of the right one. Could anything be further from The 12 Secrets of Highly Creative Women than The Bourne Ultimatum? Maybe this is a sign to think outside of the box. Congrats on your new camera. I love my Nikon D40, but boy is it HEAVY!

I hope you enjoy your camera. I went to school and lived and worked in Pershore for a few years - but I didn't have a camera

Hi great to see you here. I have visited with you in the past through another blog. Can't remember but anyway..
Very cool photos.

How nice a new camera!! You asked about the snow on my photo...here is a link for you, the snow effect is all over my blog, but since the background is white, you can only notice it on the photos (I like it that way!).
http://www.bloggerbuster.com/2008/12/simple-snow-effect-widget-for-blogger.html

congrats on the camera purchase risk action. i like the risk action of taking a different route. it will freshen my perspective. i am gonna do that today. tyou.

Good luck on getting the right book. Hmmm, maybe the Universe wants you to read that one? Talk about a risk-taker. lol

Congratulations on letting yourself buy the camera! I'll look forward to seeing your photos. Do you ever use them in SoulCollage?