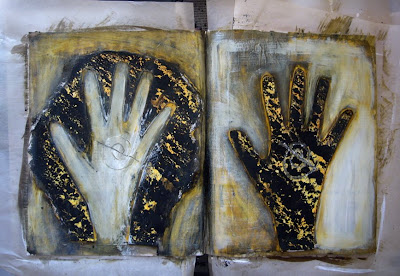 Here is a two-page spread of spread hands from my altered book - Shamanic Marks - Inspiration!

Hands were one of the most obvious things to work with in this book - for these two I've included a variation of spiral and line symbol found near rock art hands. I've included both wet and dry sgraffito.

I was planning on just using the dry sgraffito and I started off with oil pastels on a piece of cartridge paper then used black poster paint (thanks for the suggestion Tinker - my "gouache" turned out to have acrylic in its formulation) over them.

I used sgraffito to chip out a hand shape which worked rather well and the spiral symbol. I then rolled the paper and the black poster paint flaked off so much that the sgraffito became much too subtle amongst the rather bright contrast of yellow, orange and black. So I cut the hand out instead and realised I could use both the positive and the negative like this.

I used wet sgraffito for the spiral symbol on the left hand page.

I've also been experimenting with blowing paint around a hand: I made the black background by monoprinting from the overwet posterpaint used above. 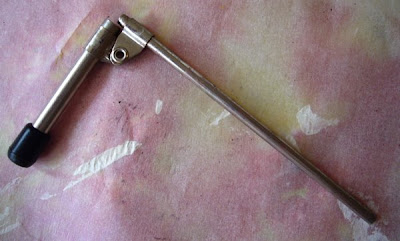 When I came to use the mouth diffuser (atomiser/atomizer) I found it quite difficult to get it to work at all - the angle of the two components is all important - having got it working with water I moved onto dilute poster paint and found I had to blow extremely hard to get a good spray. I've done three variations and am wondering what else to do with them before they too find their way into the book. I might make a lino cut of the spiral symbol.

Jaihn - oh someone else from the UK on the course - I don't feel so lonely now!

I love the complimentary effect of the two hands. The juxtaposition is striking! I really enjoy reading your process. It's most enlightening :)

Thanks Genie - I found it hard to get enough info from the web on using the diffuser so I made sure to write it up where I'd find it another time - and maybe help someone else too!

I discovered about the closed hands when I was teaching 'body parts'. Hands were fun because it tickles when someone else does the outline of your hand. when we go for a walk in the eveing there is a white hand print in the middle of a pavement. I wonder what the story is behind that?

Hi Caroline!
I love how these hands turned out! I find them endlessly intriguing...I am not familiar with the process. I would love to learn more!

I have been losing track of my favorites since I am distracted by my recovery. I will make sure that you are on my favorite list so that I can keep up with you readily!

Beautiful, I love the hand prints!

Now my mind is buzzing with ideas, birds, trees, hearts...

I'm really loving your art projects - They make me want to start something new!

Great blog, love your Art! Hope to keep up with your work....
Sincerely,
Caroline