Secret #5 of 12: Committing To Self-Focus "Eye Candy" for February's MSH on Flickr
We are onto chapter 5 of Gail McMeekin's "12 Secrets of Highly Creative Women" hosted by Jamie Ridler. 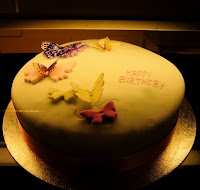 My first thought on reading this chapter was that I'm already self-focussed... then I wondered if I was just kidding myself and I noticed how hard it is to put a whole day aside to just make things.

There's the dog to walk (so I take my camera and usually get photos too - most of my house numbers have been taken that way), there's shopping to do (even then I sometimes get photos - today I got this photo of a butterfly cake) and Jim to be with (not time I plan to give up!)... We are pretty good at sharing the cooking but I do seem to do most of the laundry... He might point out that he does most of the DIY... We have no children and are not especially house proud so really there isn't much to bind me.

I think rather than focussing directly on Self-focus this week I'd be better off focussing on:

Spelt using Spell with flickr
Because Self-Forgiveness is what I need to improve my Self-Focus.

I have been reasonably productive in the last week or so. Those of you who haven't yet commented on my perpetual calendar giveaway have until noon GMT Feb 11th if you would like to be in with a chance of winning one of the three that I'm giving away... make sure you comment on that specific post as I'll be doing the draw from the names there.

I'm still collecting new photos of numbers and have started to collect photos of letters too... though as yet I haven't a full alphabet so am relying on tools like Spell with flickr for colourful words!

With the unusual amount of snow we've had this week I've built a snow totem: And I've taken lots of snowy photos... most of which have yet to get on flickr...

I've made a couple of new SoulCollage® cards, one of which - Goat - is on my card blog. I've realised that an excellent way to get a good usable set of cards would be to send them off to be printed as postcards... I'm still thinking about that as it would be a complete change in feel to the cards I've previously made.

And today I even bought myself a present:

The chapter did get me wondering what more I could do to support the creative women I know... especially those I know who aren't bloggers... I thought maybe something creative from me to help them...

Buying presents for yourself- yay!

Not so crazy about the first pic, honey. Ugh, eyeballs just scare me! I cannot even imagine putting one of those in my mouth - now I've gone and upset myself thinking about it!

I suggest your dazzling smile! If that's not possible, how about an inspirational art quote on a really simple line drawing?

Kavindra - thanks for the honest feedback - I hadn't thought of anyone finding the eyeballs repulsive like that - or of eating them... because I wouldn't eat them as they've got sugar in!

Andrea - the smile is only possible when I see people face to face - then they come naturally, though maybe not dazzlingly ;-) - I'll have a go at an inspiring quote - its just the sort of thing I wouldn't have thought of and might well be appreciated!

I love the self for give ness.

What about hosting a crafty day or night. A party with the goal of making stuff, eating and spending time together talking. I hosted one with a friend years ago in SF and it was fantastic.

D - thanks for writing that back to me - self for give ness - worth remembering!

And yes that's a brilliant idea - I wonder if I could get some people together to make some collages... oooh I'm liking that thought a lot. Thank you.

WOW! Aren't you a prolific one! Taking photos, making SoulCollage cards, treating yourself, thinking of giving to others! YAY!

That cake is the most beautiful cake I have ever seen.

And your snow totem! Is a work of art! Seriously. What did you use for the eyes? Buttons?

A great way to support creative women you know who are not bloggers is maybe have a play date. Gather them all together and create. It's so much fun! :)

I like the way you balance your creative focus with the things you need to get done-- like taking pictures while walking the dog. Catching two birds with one net, and it sounds like it is fulfilling for you both practically and creatively! That's a lovely balance.

Also if you do a creative collage support event, you could also share some of the results with the world wide web here with us! You could also do features on your friends work, opening up a window!

Wonderful snowtotem, Caro.
Just read the other comments about a collage party - that sounds like a lot of creative fun - wish I could come!

my goodness, you seem to be one creative productive artistic lady! Congratulations on that.

I am loving that top pic and that is the GREATEST snow totem EVER!!!!

Way to go with your creativity. You inspire me.

Self forgiveness... That's an important one! Have you seen the "artists creed" video? I was blown away...I have posted on my blog if you want to check it out. Very inspiring!

Love the self forgiveness! I know I could use this as well. D and Tinker's idea about hosting a creative gathering is so wonderful! I'm planning my own . . .